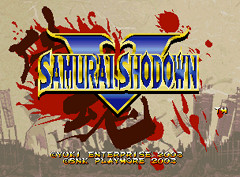 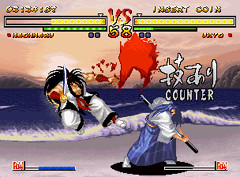 Here's your chance to brandish your katana! This fifth episode of the excellent sword fighting game series that's "Samurai Shodown" is as good as the previous ones. Choose one of the 24 original fighters and start to slice! This is a marvellous game because it's really easy to do impressive special moves even for the average player. Its accessibility is this game's strong point. Being a sword fighting game, every blow gives great blood splashes! The only bad thing point is that both the story and the ending have been removed in the european release, so the game looses a little of its interest. Anyway the story isn't essential in a fighting game, is it! Conclusion: Samurai Shodown V is really damn fun! Highly recommended!
A special version of this game exists (featuring more fighters, new backgrounds, ...) but only 1000 copies of it were produced.