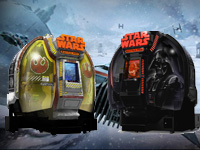 Today, Bandai Namco announced that a home version of Star Wars Battle Pod would soon be available in Europe, USA, Japan and other regions! Pre-orders will begin on June 18 and Star Wars fans will have to pay the sum of $35000 or £24000 (excluding shipping and import costs) to own the game. But this is not all: a Premium version will also be available in two designs: one inspired by the rebel Alliance and the other by Darth Vader. The choice will be difficult for Star Wars lovers! The Premium version will be equipped with genuine leather seats that move according to the action on the screen. The lucky ones who acquire this collection piece will receive a plate engraved with their name and a serial number as well as a user manual and a exclusive carpeting. Their names will also be added to the game end credits. The MSRP of the Premium version is $100000. 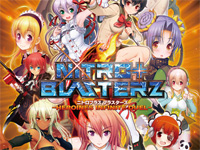 Nitro+ Blasterz - Heroines Infinite Duel hits Japan today. This characters crossover 2D fighting game is released by Examu and is available through NESiCAxLive. The line-up includes characters from the well-known visual novels publisher Nitroplus. Nitro+ Blasterz - Heroines Infinite Duel has the same concept as Dengeki Bunko Fighting Climax: there are playable and support characters. The support characters help with assist attacks. The players can try different characters combination to test different fighting styles. Each character gets a lot of combos. Ein (Phantom: Phantom of Inferno), Mohra (Kyuuketsu Senki Vjedogonia), Sansei Muramasa (Full Metal Daemon Muramasa) and Anna (GekkÅ no Carnevale) are some of the playable characters. As partner, the player can select Spika (Star Mine Girl), Natsumi Aibara (Hello, World), Dragon (Dra+Koi), Mugen Yoguruma (DYN Freaks) and Sonico (Super Sonico) and other ones. Saber (playable) from Fate/Zero and Akane Tsunemori (partner) from Psycho-Pass are also present in the game. The opening movie is available here. 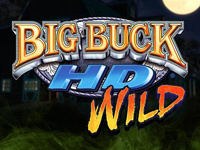 Big Buck HD Wild (Big Buck HD v08.00) is out! Papy messed up and created a beverage turning people into zombies. It's up to you to clean this mess with your shotgun in this Big Buck HD upgrade. Beside the Prehistoric Irish Elk and the new bonus games, the major new feature is the new "In Case of Zombies: Doe of the Dead" game mode in which you battle zombies and zombie animals. Curious? Check this presentation video! The upgrade is available as an online update via the CoinUp service (beware, the file size of the downloaded content is big!) and as an upgrade kit for offline machines. The kit includes a new marquee. Of course, this upgrade doesn't remove the duck hunt game mode added in the "Duck Dynasty" update. Ground game, ducks and zombies, this is the most complete hunting game ever created! 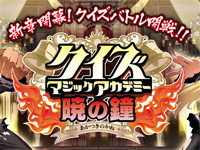 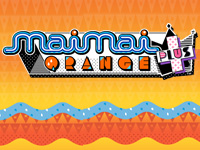 The new version of maimai ORANGE is available since March 19. Sega added some new features to its music game. First, the TOP3 feature: every Thursday, a Top 3 of the best players at each arcade is done. Then the NEWGET feature: a new category listing new songs and objets recently won will be added to help the player to find them faster. There are also a new maiCHALLENGE and a new reset button. 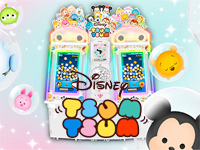 Good news for Tsum Tsum collectors: Disney Tsum Tsum from Konami was released in Japan on March 18. The Tsum Tsums are round fluff plush representing Disney characters especially popular in Japan. The are available worldwide since a few months ago. Disney Tsum Tsum is the arcade version of the smartphone game (Android and iPhone) which gameplay is simple: connect at least 3 identical tsums to make them disappear. Each Tsum Tsum has special abilities and players can save their data via the e-Amusmement Pass. They can also play in multiplayer cooperative mode. At the end of a game, the player receives a capsule with a super kawai tsum tsum keychain inside. 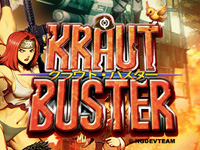 NG:DEV.TEAM announces the opening of pre-orders for its next game for Neo-Geo MVS: Kraut Buster. It's a run'n'gun game in the style of Metal Slug. The story takes place in Europe in 1936, John "Küken" Mallone and Jack "Handsome" Rowdy are part of the Kraut Buster corps, their mission: defeat the evil dictator Dolph Edelwolf and save all girls in the process. Kraut Buster is the first game from NG:DEV.TEAM which supports 2-player simultaneous gameplay. The 2-player mode is integrated within the game engine and will be re-used in the future for appropriate titles, nothing could make us more happy! This is what was missing the most in the productions of the German developer. The game will feature 3 routes of different difficulty, finishing the game using the normal difficulty course will take an average of 35 minutes during which the players fight 5 or 6 boss and sub-boss. Technically, the game will run at 60fps and will occupy approximately 784MBits of ROM space. The different levels will be quite long and will offer panoramic backdrops with parallax scrolling. Like most games of this manufacturer, the scoring system is chain based. The project occupies 2 full-time and one freelance pixel artists, one programmer/designer and one musician; the excellent Rafael Dyll. A video of the alpha version has been published on Youtube, the least we can say is that it bears a strong resemblance with Metal Slug (including the bloody aspect). But the game coming out this Winter, plenty of time remains to refine the product. The Kraut Buster cartridge is currently available for pre-order in two editions: the standard gamecenter edition in its cardboard box for €399 and a limited edition of 99 copies hosted in a shockbox with a CD of the soundtrack, 2 posters, a postcard and a set of bonus stickers. This deluxe edition costs €449. A spin-off of Kraut Buster using the same characters but played in a top down view will be released later. 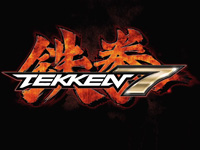 In many Japanese game centers, yesterday was the last day of existence of Tekken Tag Tournament 2 Unlimited because it was replaced today by... Tekken 7! Finally, here is the seventh episode in a saga which began 20 years ago, this one uses the Unreal Engine 4. Darker than the previous games, this opus closes the Mishima clan saga with answers to many questions about the rivalry between Heihachi, Kazuya and Jin Kazama as well as the origin of the Devil Gene. There are currently 20 characters that you can choose including 4 new ones: Katarina Alves (a Brazilian girl using French kickboxing), Claudio Serafino (an Italian man with mysterious powers), Lucky Chloe (an otaku girl in a cat costume) and Shaheen (Saudi Arabian fighter). Small spoiler; the boss of the fourth stage is Heihachi Mishima and the final boss is his deceased wife Kazumi (which is a non-playable character). Regarding the mechanics of the game, there are two main innovations: the Rage Art, which allows the player to execute several unblockable moves if his life bar is almost empty, which allows him to inflict up to 80% of damage to the opponent. Attention, this disables the power gain usually granted for normal hits. The other big feature is the Power Crush, which leaves the player continue his attacks even if he is hit by the enemy. Beware that he however receive damage from these attacks. Also new is the Screw Attack system which allows a player to keep hitting an enemy who has just fallen on the ground. A first in fighting games is the possibility for each player to choose on which side he fights (both players may start on the left side of the screen, which is traditionally reserved to player 1), there is also a practice mode to train the performance of the different movements. Local and online matches are possible. Winning a certain number of matches unlocks a Treasure Box containing objects to customize the character and save it thanks to Banapassport. A limited edition of 88 special Noir cabinets (88 of Mishima) with golden details equipped with Tekken 7 was available on February 18 (with limited game modes), but now is the day the game is available in all game centers. As usual with the Tekken games, additional characters will appear in the game over time. [Trailer][Opening] 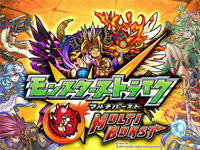 Monster Strike MULTI BURST will be released in Japan tomorrow. This is the arcade version of Monster Strike, a RPG for Japanese smartphones developped by Mixi and Konami. The players use monster and skill cards to play. The arcade version adds new features to the smartphone version: new monsters and a new 2vs2 Tag Battle online mode. Konami already announced that there will be future events common to both the arcade and the smartphone versions of the game.

Guilty Gear Xrd -SIGN- v.1.10 will be availabe on March 19. This is a major update since 3 new characters will be added: Shin Kiske, Elphelt Valentine and Leo = Whitefang. The 17 game characters will be rebalanced and the battle system will be improved. Two new stages will also be added as well as two new game modes: MOM and Sparring mode.